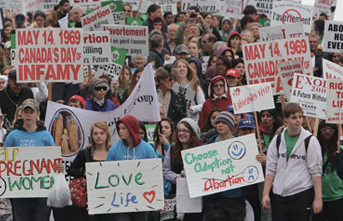 View our Video on U Tube called: The Reality of the Unexamined Life https://youtu.be/9QBp8SznkwA?t=8

Throughout history those who were believed to be undesirables were killed through legal means: African Americans, Jews, Indians and preborn babies. The last 100 years are rife with examples.

There is a significant correlation to Remembrance Day November 11, to the history of abortion. If we go back to World War 11 in Nazi Germany one of Adolf Hitler’s values was to create a pure race so he began his extermination of the Jewish race along with any religion or persons that he thought were inferior for whatever reason.

A parallel concept had already emerged in America with the Founder of the American Birth Control movement that was later called Planned Parenthood. Margaret Sanger was not part of the early Feminist movement.  She was an eugenist and a racist who wanted to rid the country of the black race and anyone else she deemed unfit to live who may be mentally or physically unfit. Her term was “reckless breeders”. Hitlers term was “useless eaters”. Margaret Sanger believed that the purpose of birth control was “to create a race of thoroughbreds”. On people of color, immigrants, and the needy she believed they were “human weeds, spawning human beings who never should have been born”.  It was her full intention to exterminate the entire African American population as well as all those who are mentally or physically handicapped through birth control and sterilization.

The following Trailer Black Genocide Maafa 21 has language that may be offensive. The full length version is available on U-tube. 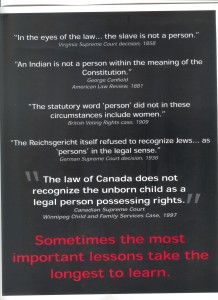 Law (Morgentaler and Dr. Bernard Nathanson interviews prior to the current law in Canada)  fetology and rape

‘R v Morgentaler [1] was a decision of the Supreme Court of Canada which held that the abortion provision in the Criminal Code was unconstitutional, as it violated a woman‘s right under section 7 of the Canadian Charter of Rights and Freedoms to security of person. Since this ruling, there have been no criminal laws regulating abortion in Canada.

Prior to this ruling, section 251.9 of the Criminal Code,[2] allowed for abortions to be performed at only accredited hospitals with the proper certification of approval from the hospital‘sTherapeutic Abortion Committee.’

This lawlessness is shared with N Korea and China